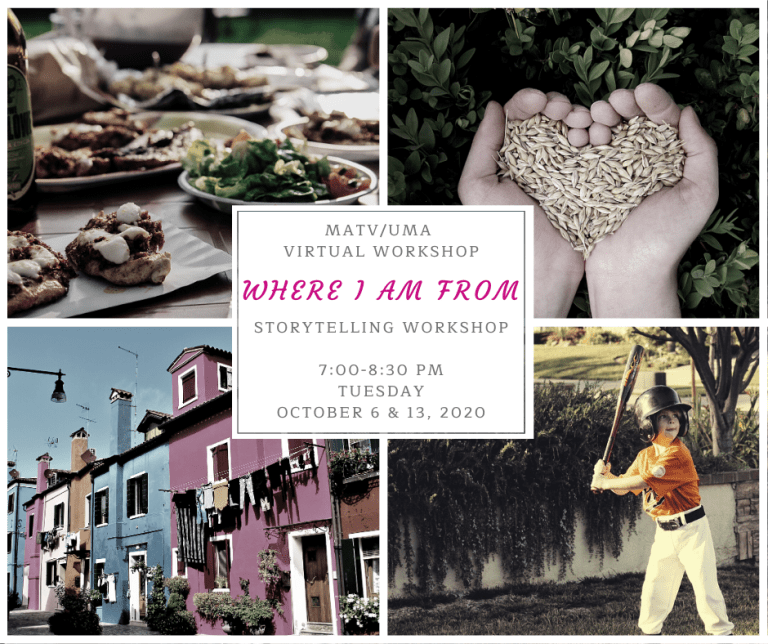 What is your story? Where do you come from?

“Where are you from?” is a question that is often asked and usually replied to with a geographic location. Yet we are so much more than a place on a map. We are from types of food, of people and customs. We are from habits and feelings and smells and sounds. We are from places we’ve been to and challenges we’ve overcome. These influences are just as much “where we are from” and what makes us who we are as the country or region or city of our birth.

In this “Where I am From“ writing workshop, participants will work with spoken-word artist CD Collins to compose and present a “Where I Am From” poem (no poetry-writing or performance experience required). Participants will get to know each other through writing exercises and will be walked through the process of writing their poems. A virtual public reading will be held several weeks following the two-part class.

“I was amazed that there were so many different voices and how far we all came in our writing. At first I was not sure I could use the techniques the instructor taught, but then I realized they worked!”

“I liked that our professor participated in the class activities, and made everything lively. We learned so much about each other and about ourselves. I wish I could have more classes like this.”

“CD Collins has the voice of a natural-born storyteller. Original and unforgettable.”

Stephen McCauley author, The Object of My Affection.

Kentucky native CD Collins follows the storytelling traditions of the South, both as a solo artist and when accompanied by musicians. She is one of the originators of the resurgence of spoken-word with live music. Her work is represented in five compact discs, one of which won Best Spoken-Word album at the Boston Poetry Awards.

Ms. Collins has performed in a variety of venues including Berklee College of Music Performance Hall, Boston Public Library, Club Passim, Boston’s Institute of Contemporary Art, the New York Public Library. She was guest at the John F. Kennedy Center for the Performing Arts in Washington, D.C. for a pilot conference to advance the development of innovative technologies that support the inclusion of people with disabilities.

She is the author of three books, a collection of short stories Blue Land (Polyho Press), a poetry collection (Ibbetson Street Press) and a novel Afterheat (Empty City Press). Her fiction has appeared in numerous literary magazines including StoryQuarterly, Phoebe, Salamander and The Pennsylvania Review.

She holds a B.A. and an M.A. in English Literature from the University of Kentucky where she studied with author and environmental activist Wendell Berry. More information at www.cdcollins.com

*This workshop is sponsored by Malden Reads. Grant-Subsidized Fee to participants: $20. This project is coordinated through MATV/UMA (Urban Media Arts) and is offered with funding support from the community-wide reading program, Malden Reads: One City, One Book. MATV/UMA and Malden Reads believe in the power of storytelling to bring people together and find common ground across the spectrum of differences that may divide us.